Haze creates an amorphous soft-edged lightening or darkening of a ketucari’s coat, mixed with more defined swirls similar to those produced by Marbling. The marking can mix hard and soft edges, and layer over itself. Optionally, the soft areas can be textured like the example below.

Haze can optionally also fade into an accent color in part of its range-- this should not take up more than approximately 40% of the marking’s area. The accent color can be any color.

Haze’s main color can be either lighter or darker than the base coat. It can be pure black or pure white. 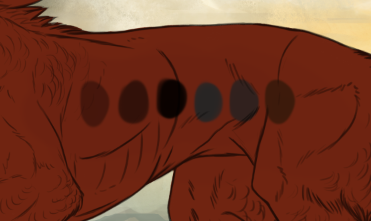 Haze can appear anywhere on the ketucari, and has no minimum. However, it must be visible on the design.