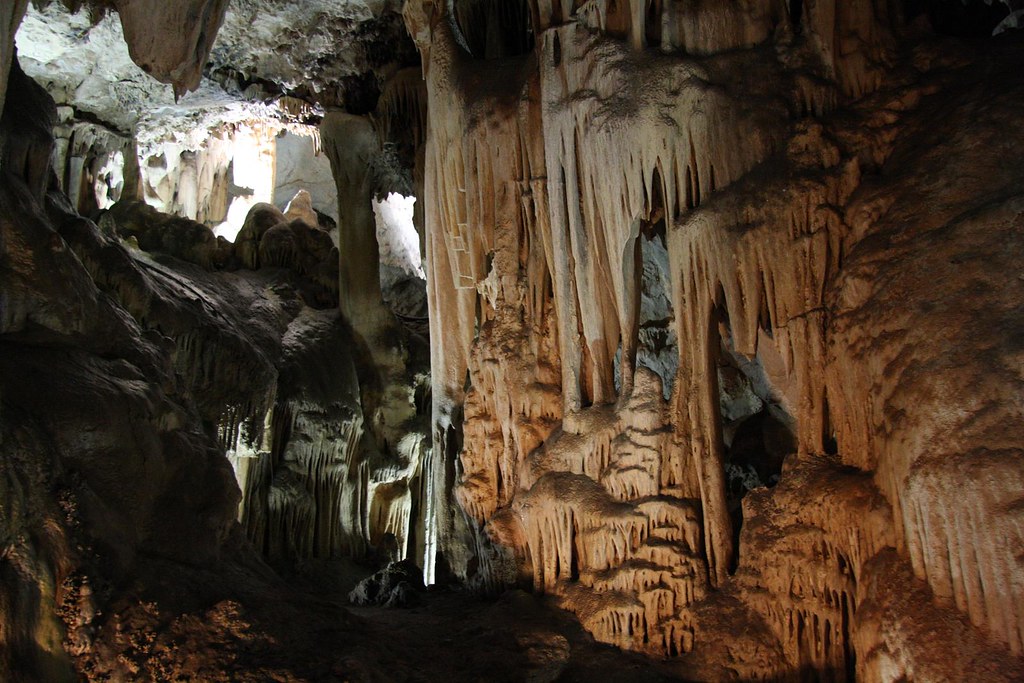 These subzones may be claimed by packs!
Twilight Hollow
The region of the Gusting Caverns that is closest to the entrance, this area is the lightest part of the cavern during the day. Slippery, rough-cut stairs lead down to a large cavern that is still capable of supporting greenery. Water runs down the cavern walls in some areas.
Whirlwind Chasm
Separating the Twilight Hollow from the rest of the cavern, Whirlwind Chasm is the reason many adventurers don't make it very far. In order to cross, individuals must jump across stone columns that rise up from the cave floor. If the wide space between the columns wasn't enough of a deterrent, adventurers must also combat the gusts of wind that are strong enough to knock someone off their feet and to their deaths. However, a few clever cavers have found a hidden path that leads down to the cave floor, where crossing is much less dangerous.
Larval Coil
This section of the cavern is the main territory of its grub population. Not all of them have been corrupted by Mumotsu, and feed peacefully on the banukel that is abundant here. This area is fairly easy to navigate.
Bluerock Pool
A lake within the cavern that is fed by a waterfall from above. Harmless, bioluminescent bacteria cause the lake to have a faint blue glow.
Ruins of An'Terunku
This large cavern is accessible through a narrow passage from within the Gusting Cavern as well as from an underwater passage from the sea. The interior has been carved to look like one of Anti's temples, even down to the intricate designs on the rock columns. An'Terunku served as Anti's prison prior to the Machine War. It was intended to hold him for eternity, but Asli freed him in return for his help defeating Aterrin. Grooves can still be seen on the cavern floor where Anti spent countless hours pacing while dragging massive enchanted chains.

Mumotsu's appearance is far from deceptive-- her attitude is every bit as nasty as she looks. She spends most of her time resting in the deepest parts of the cavern, but if she is awoken for any reason she will attack with a vengeance. When angry, she is frighteningly quick and will even climb walls to catch her quarry.

Ketucari cannot adventure here without the Keen Sight skill or a protective item.

Toggle Spoiler
Raharjo says:
"Well, it was bound to happen sometime... some dolt wandered into this cavern without the necessary equipment, shouting something about scoring some cave 'shrooms. They should have been back by now, but with all the creepy-crawlies in there, I wouldn't be surprised if something happened to them. I would go find them myself, but I think it'd be more humbling if a scrub like you went and brought them back. I've got some Mumotsu slime here from the last time we faced off against her ugly mug. Spreading it on you should keep mostly everything away, but hey-- no promises. Bring that idiot back, dead or alive, and I'll make it worth your while."

Depict your (slime-coated) ketucari venturing into the cavern after the errant adventurer without disturbing Mumotsu, or anything else for that matter!

Mumotsu says:
"Think you can go sneaking about my territory, hmm? Well, I've caught you, you disgusting little wretch! It's a shame I'm not hungry right now... though I could always save you for later.... hmm... how about we play a game instead? If you win, I'll let you go. I'll even let you choose which game we play, how about that, you ugly vermin? One, I'll cast an illusion to make you see several of me. Identify which one is the real me and you'll be free to go. Two, you will stay here for a few days and help me chase down and trap other vermin like yourself who pass through here. Whoever gets the most kills after three days will win."

• Depict your ketucari accepting Mumotsu's proposition to play a game of Illusion.

• Depict your ketucari taking the second option by playing a killing game with Mumotsu.