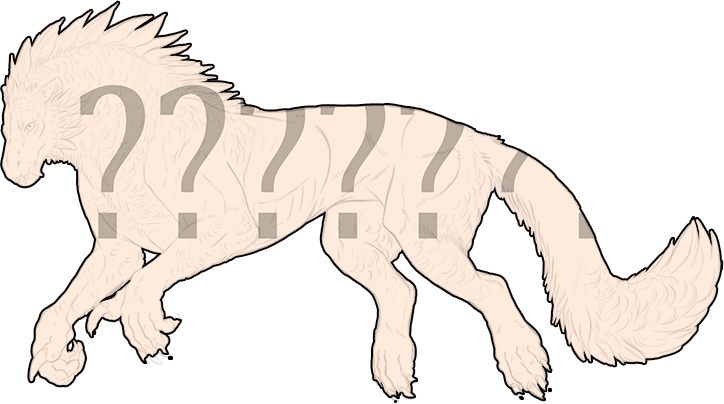 A Term you'll see used in the group a lot is "Semi Custom".

Semi customs are special custom genos where the genes and gene combinations are selected by the Player and obtained through means other than Breeding. Semi-Customs are not free to make, and must be received either through gameplay or purchased from the group or an individual admin.

Do not ask admins if they're offering semi customs, if they do offer them they will advertise them.

Unless stated otherwise, a Semi Custom obtained free through gameplay is limited to the following:

Buff, Bronze, Brown, or Charcoal base coat
-Up to 4 Common genes
OR
-Up to 3 Common genes and 1 Uncommon gene

Players determine the sex of the Semi, but admins determine the exact genotype and basecoat string. A semi custom will NEVER have a homozygous marking, and will always have a litter gene of "Ww" or "wwh".
The uncommon gene can add an uncommon color modifier such as Tint or Smokey, or Raven. It could alternatively be used to add horns or any Uncommon gene except Acid (as Acid is just homozygous Lacing).
Admins will also determine what your ketucari's lineage is based on the genes you choose.

Free Semi Customs may be altered at player request. However, the Cloning Vat item may NOT be used on a pre-existing Semi-Custom.

If stated otherise on an event or reward journal, other gene configurations may be used. The most common alternat configuration is:
-Up to 1 Common and 1 Rare

Purchased Semi Customs come from the rare Group Fundraisers, or individual admin sales. Unlike free gameplay ones, these can have more than 4 genes at conception!
The caveat is that each gene adds to the price of the semi custom, and most fundraisers have hard limits on how many of each tier of gene you can have. When a sale goes up, the limits will be listed there.
Admin customs may or may not have limits, depending on the admin and the sale and what they're offering. Admin-purchased semi customs may claim Acid and Melanistic Pastel. No other genes may be homozygous.

Wild Ketucari are Free Ketucari who can be encountered with either the Charming Skill or the Endearing Display Lineage Skill or use of the Distress Beacon* item.
Wild Ketucari typically have no lineage, and vary wildly in value. They are completely random and so get some very interesting gene combinations.
When you find one, they will be marked in your ketucari's adventure or battle form like so: 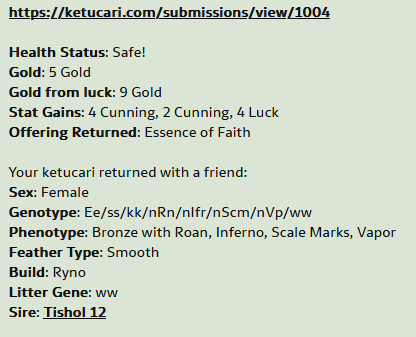 They will also be found in your ketucari.com submission link.
Wild ketucari may have tokens added to them, Figures of Eirian and Verdani, and Dylana Statuettes, if they have genes of the proper rarity.
If they have one or more Rare gene (excluding Blue Inferno or Melanistic Pastel they will receive a singular starter in their lineage.

Now, what the heck is a Cloning Vat, how do you get one, and why should you get one?

The Cloning Vat is a Craftable Item over at Kenkasei's Hovel. You might be thinking that it's a bit resource heavy, you would be right!
That's because Cloning Vats are meant to be used on Semi-Customs.
Free ones
Wild Ketucari
Purchased customs
They do it all!

But what exactly do they do, give you two for the price of one?
Well, kind of.

Cloning Vats can be used to create custom lineages for your shiny new semi custom at the Sire/Dam line, essentially allowing you to make custom cubs for your breeding pairs.
The basics of Cloning Vats are as Follows:

More specific details depend on what type of Semi Custom you are applying the Vat to:

When used on a Free Semi Custom, the Cloning Vat increases the gene limits to the following configurations.

All genes must be present on the parents. You are not required to use all of them.

When used on a PURCHASED Semi Custom, the Cloning Vat has the following effects:

Cloning Vats may be used on the Wild Semi Custom with the same limits found under "Cloning Vat+Free Semi Customs".