Inspirational Images:
The Viridian Tangle is a lush jungle located in Lucedar, and is home to the goddess of life Saoirse. Mostly safe from the destructive denizens of the north, the majority of the untangle is untouched wilderness brimming with wildlife and abundant resources.

These subzones may be claimed by packs!
Kesembu Ruins
A sect of ancient Lucedarians once tried to honor Saoirse here by sacrificing her own banshees, thinking the greenery that sprouted where their blood spilled would bring her joy. Obviously she was displeased by this; the usually benevolent goddess demolished the inhabitants, leaving only cold stone behind to be reclaimed by the jungle.

Ley Flats
The thick trees and underbrush abruptly end, giving way to an area consisting of several acres of flat, white sand and lush soft grasses. No one knows from where the sand came, though some suspect that from above it makes a cohesive pattern.

Imp Borough
Fruit trees of many a sort dominate this part of the jungle, and with them comes droves of imps. While the spoils here are rich, one must be careful to avoid getting mobbed by a troop of the monster monkeys.

Pools of Harmony
This area of jungle is densely populated by waterfalls and crystal-clear pools. A favorite place of Saoirse and her banshees, their relaxing songs can sometimes be heard resonating across the waters.

Huntress' Shelf
These plant-laden cliffs rise high above the tree canopy of the Tangle. Navigable by bridges cultivated from giant tree roots, the upper reaches of the Shelf give a great vantage point over the jungle. 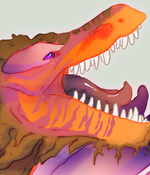 Saoirse is the goddess of life and guardian of the Viridian Tangle. Like her destructive counterpart Garoch, she has also been charged with guarding nature spirits known as banshees. Saoirse is known to be kind and benevolent, though she can be roused to violence if her banshees are endangered.

Ketucari with either the Keen Sight skill or the Thick Skin skill can find treasure chests here!

This quest may only be completed by ketucari pursuing the Greheli attunement.

Eirian says:
"You there! Normally I'd have a spear through your heart by now for trespassing on my mother Saoirse's territory, but as much as it pains me to admit, I'm in need of a hand. Surely you've noticed that the perasytes in this area have got themselves into a tizzy for some reason. They're dangerous enough on their own, but now they've begun swarming and even attacking the nature spirits! I think the source of their mania lies with a beast of Anti's creation that I've seen moving through the jungle for the past for days. The only problem is that the closer I get to the creature, the more perasytes I've got to fend off. Help me fight my way through the swarm so that I may put an end to this madness!"

• Depict your ketucari using their crush technique to clear the way for Eirian through the perasyte swarm.

• Eirian is one of the few obstacles standing between your ketucari and the valuable hide of banshees. Maybe if they used their skill on her instead of the perasytes while she's distracted, they could score some loot from the little nature spirits...

This quest may only be completed by ketucari pursuing the Talik attunement.

Scald says:
"Alright, I definitely need your help with this one. I found some ruins beneath the tree roots and I'm not exactly sure of what they are yet, but if its a tomb the treasure could be incredible! The problem is that an abnormally huge dragon has made its lair inside. It is immense and too strong for any one of us. There is no way around it, as its own body is as thick as the tunnels themselves, and if it goes mad it may bring the tunnels down. If we want to get the resources we need a distraction before it can see us.  If you help me out I will share my treasure fairly."

• Depict your ketucari using lightning to bounce off through the tunnel walls, distracting the creature and driving it away from the gathering party.

• Sharing is for losers! Depict your ketucari using lightning to bounce off through the tunnel walls, driving the creature toward the gathering party so that they may grab the treasure for themselves.

This quest may only be completed by ketucari pursuing the Dasrah attunement.

Saoirse says:
"I see you are on the journey to learning the ways of dasrah. It is the most versatile of the magics, and also the most volatile. I have seen it used for many a good purpose, but those who choose the destructive path are some of the most monstrous creatures I have ever met. With this path, you will have the power to give life and to take it away. I am interested to see which road you will take, so that I may know if I have another ally... or an enemy."

• Saoirse has a cast a spell on your ketucari that sends them into a highly realistic dream scenario. In this hallucination, your ketucari quickly realizes that they are gravely injured. Beside them, they see someone they know (this can be a family member, friend, enemy, etc.) who is also near death. Depict your ketucari using their drain magic in reverse: making the ultimate sacrifice by giving the last of their energy to the other individual in order to save them.

• Saoirse has a cast a spell on your ketucari that sends them into a highly realistic dream scenario. In this hallucination, your ketucari quickly realizes that they are gravely injured. Beside them, they see someone they know (this can be a family member, friend, enemy, etc.) who is also near death. Depict your ketucari using their drain magic to rob the other individual of the last of their life energy, thereby saving themselves.

This quest may only be completed by elder ketucari.

Ashoka says:
"Poisons and venoms are my specialty! I've been commissioned by a Lucedarian tribe to create a way to make their warriors less susceptible to clever enemies who seek to take them down with discreet methods. This place is the perfect area in which to gather all sorts of poison and venom samples, what with the incredibly biodiversity. I've got almost everything I need, and as it stands I've only two more items on my checklist to acquire. One is a poison thorn from a gigantic man-eating plant known as a Manglesnap. The other is a drop of venom from a spider the size of an armatherium, known as a Black Bloodweaver. If you'd help me obtain one, I'll be sure to give you some of my finished product!"

Depict your ketucari gathering one of the items Ashoka needs by battling either a Manglesnap or a Black Bloodweaver. Artistic liberties as far as the monsters' appearances are welcome.

This quest may only be completed by elder ketucari.

Angkasa says:
"This place is one of Anti's favorite targets for spreading death and disease through his minions. We've fought so many horrors to protect this place, seen so many atrocities... and yet, for some reason this latest transgression against the Tangle seems worst of all. A group of powerful demons has been moving through the villages scattered about the rainforests, slaughtering everyone in their path and using necromancy to enslave the souls before they can return to the planet's lifestream. They must be disposed of, and those souls set free. It is the right thing to do, but if that isn't enough of a reward for you, you may receive a blessing from Saoirse for aiding the effort."

Depict your ketucari either battling the necromancer demons (artistic liberties are welcome) and/or freeing the enslaved souls of the people they've killed.